All These Disney Rides Need a Rework or a Tear... 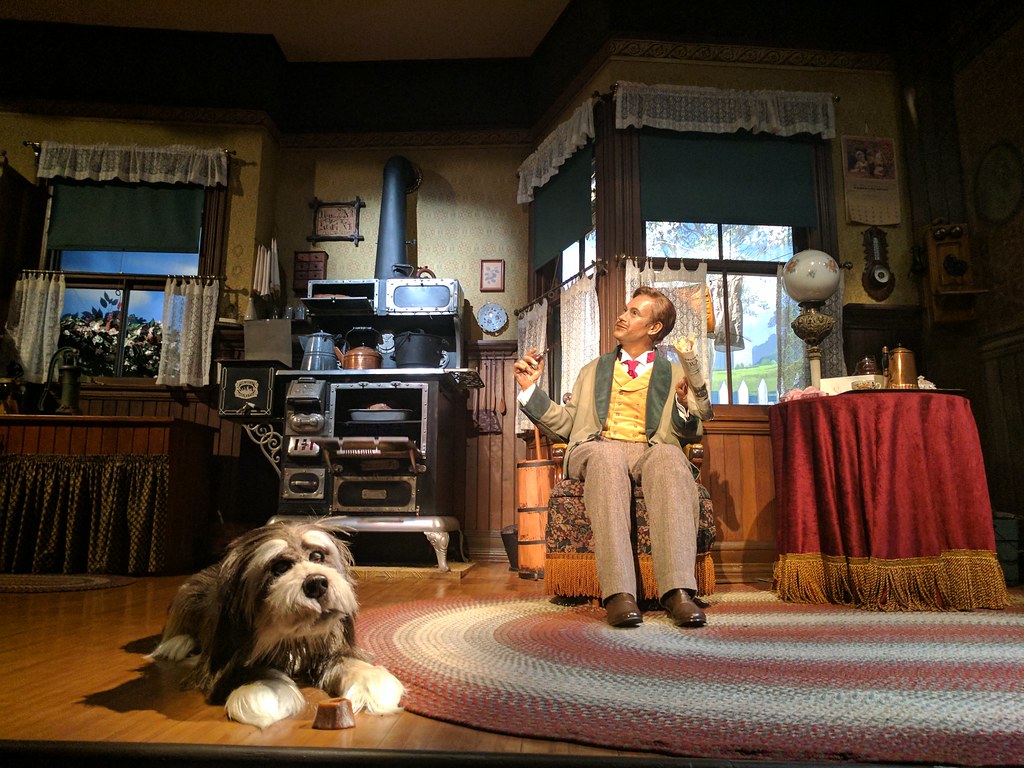 It humanizes and normalizes the racist culture of the average white family. Also, when you consider Walt’s racist ideology, the word progress sounds more problematic. Perhaps, it can be rebranded to celebrate real progress like the progress that BLM has made. 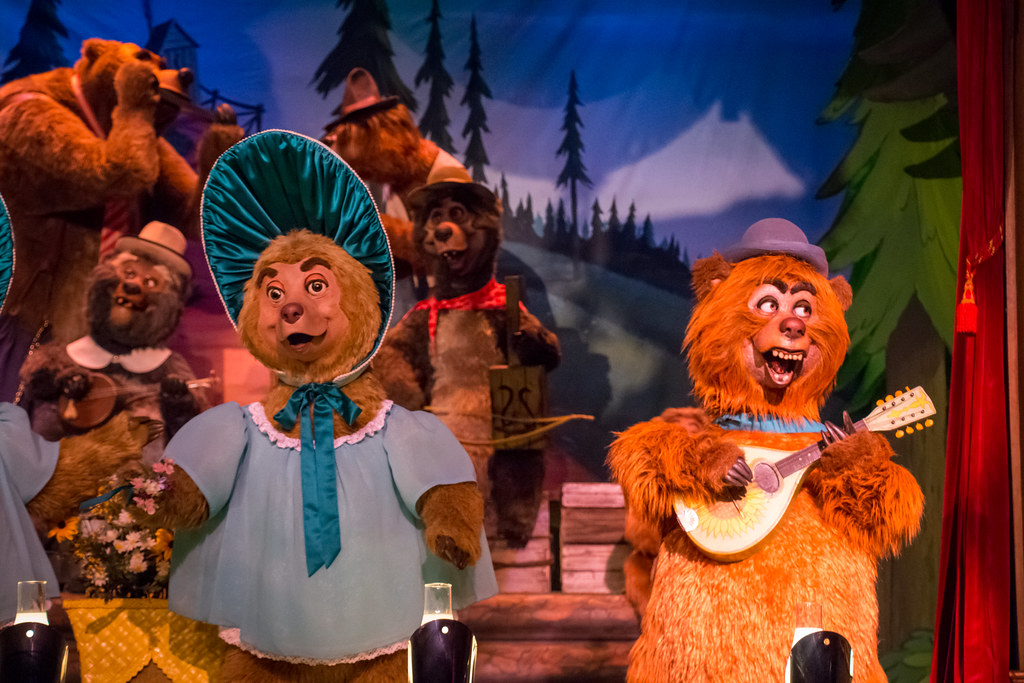 This ride oozes Southern pride. In 2020, this sort of Southern propaganda just feels gross. In order to be more transparent, they should give one of the bears a Confederate flag, hood, and beer gut, so kids can know what the South really looks like.

The Hall of Presidents 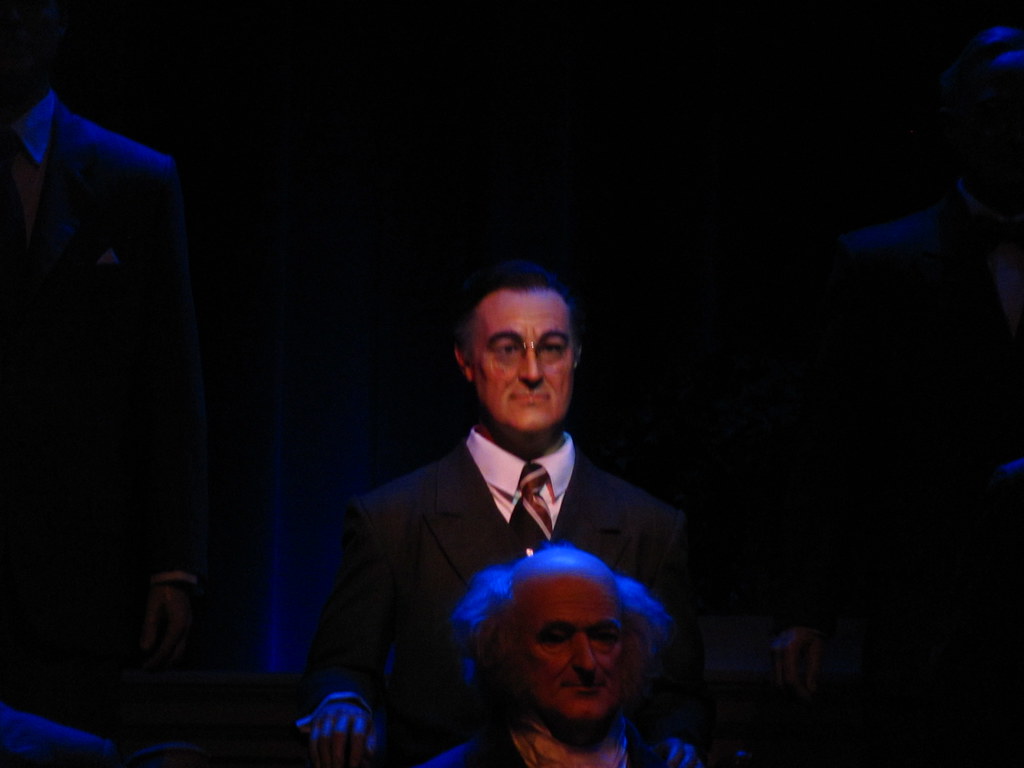 When we have a President like Trump, it can be hard to want a ride celebrating the idea of the Presidency. However, Trump is not the first racist President. The fact is, some Presidents in history have been racist. As a result, Disney does not need a ride to honor Presidents. Tear it down, just like a racist statue.

The Magic Carpets of Aladdin 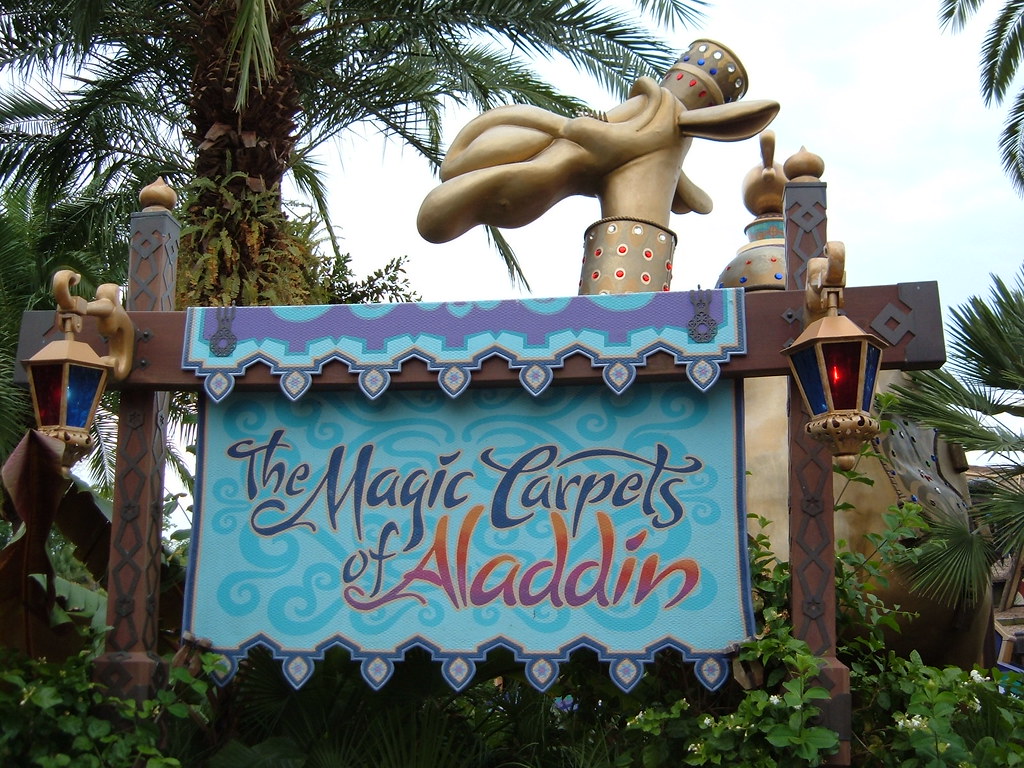 Not only does the movie Aladdin glorify toxic relationships, but it also presents a deeply bigoted view of the Middle East. Plus, the new movie sucked. 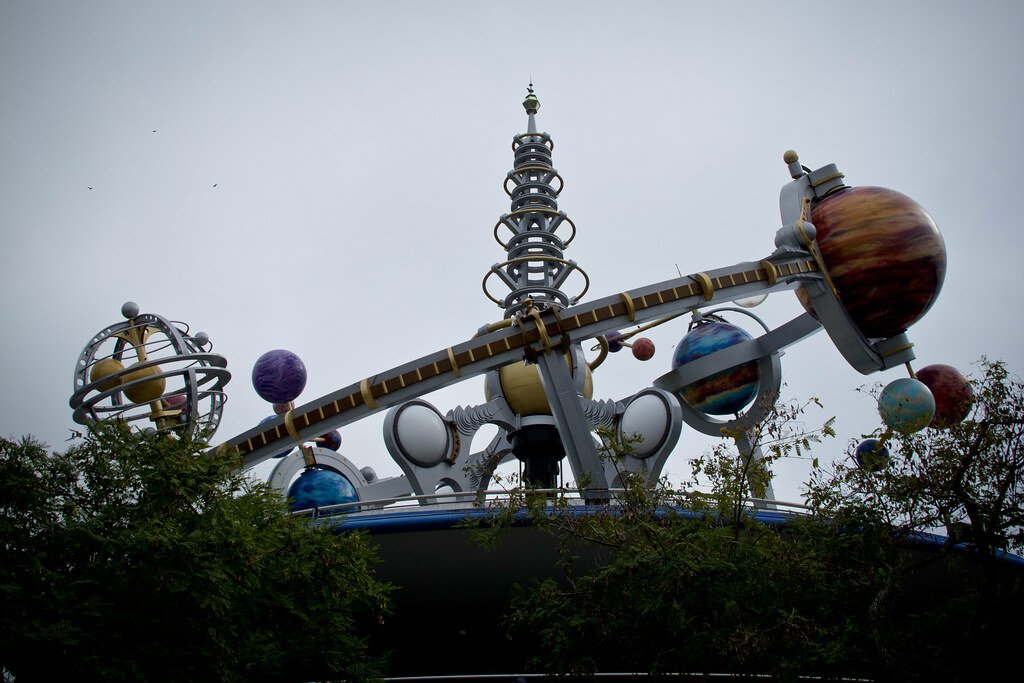 We have already ruined this planet, do we need to do this on other planets too? Noted futurist and astrophile Walt Disney, dreamed of colonizing and ruining every planet in the galaxy. All with the help of literal Nazi Von Braun. This ride needs to be removed, so we can de-incentivise space colonialism. 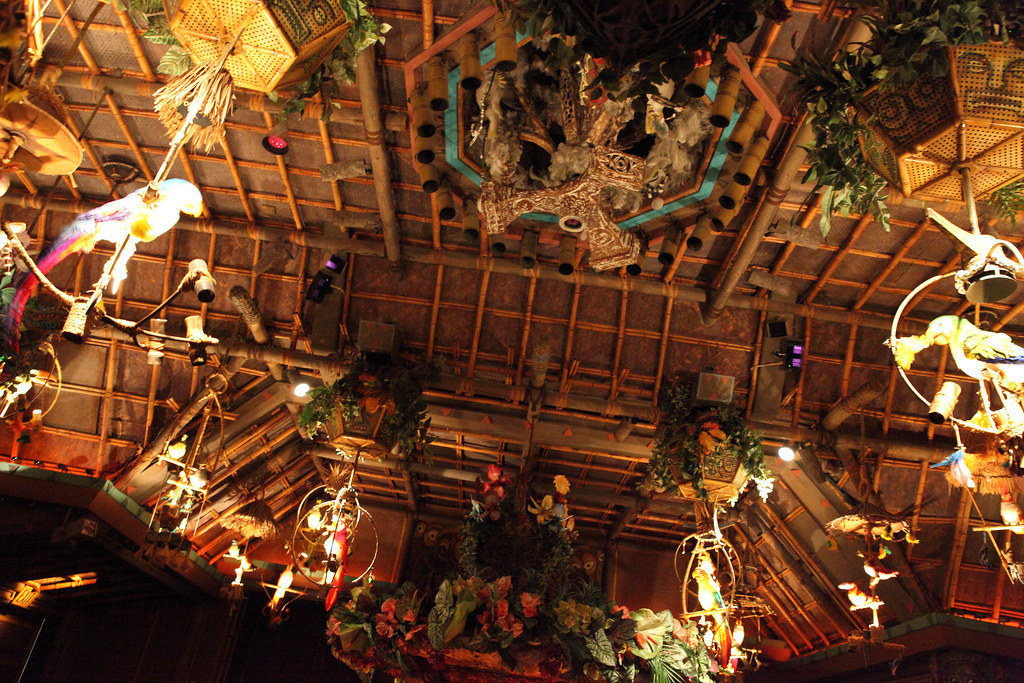 Tiki bars are inherently problematic. This attraction is a textbook example of cultural appropriation. This thing should be torn down just because of the concept. However it gets worse, the accent that the Tiki heads use is a racial caricature, and just feels so outdated. A more authentic view of island life, such as rethemeing it to Moana, may be the only way to save this attraction from the chopping block. 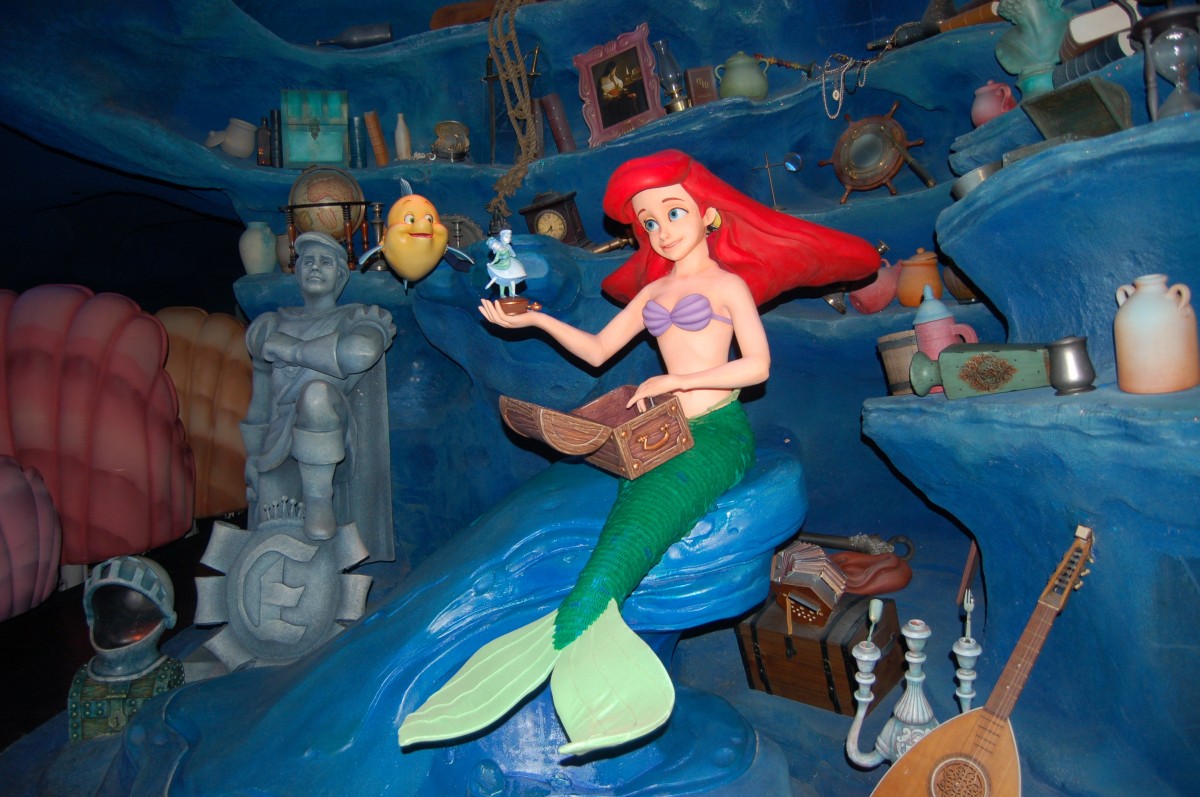 This ride is still using the outdated 1980s version of the movie and not the progressive 2021 version. Ariel is black, If this ride wants to be around in 10 years, they are going to need to update it to reflect that.

Walt was known to have a deep love for all things railroad. This included the unfair and dangerous work conditions that the mostly immigrant railroad workers faced. When Walt makes a railroad ride he is celebrating the horrific history of the US railroads. However, this ride does not need to be torn down. Riders can be given pamphlets that explain the trials the POCs had to go through to build the railroads. This can turn a frightening historical reality, into a teaching moment for kids. 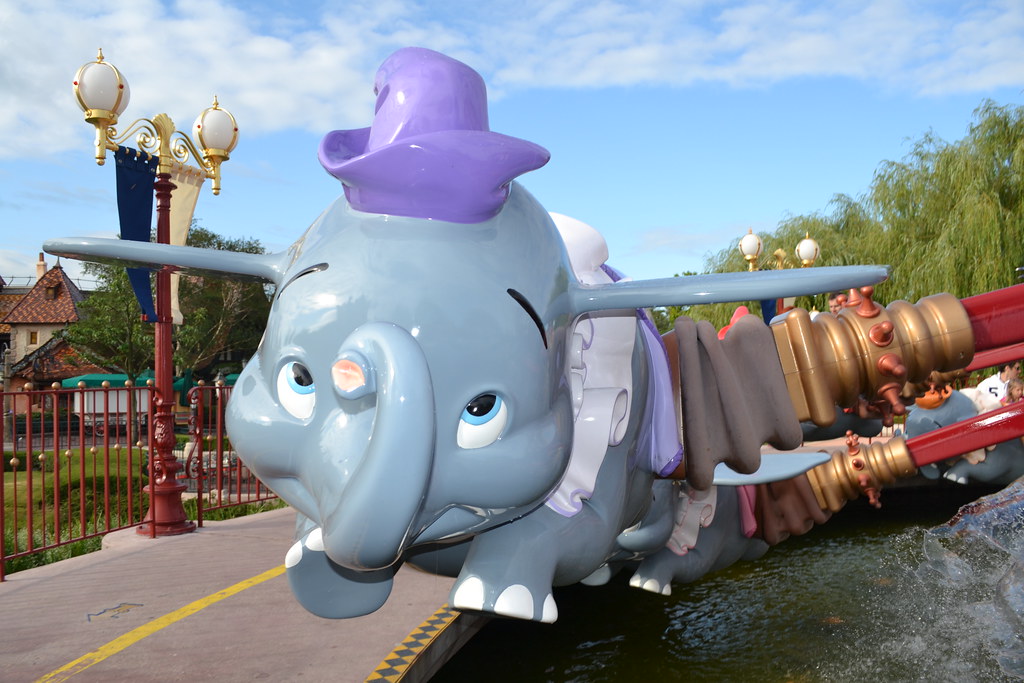 Like many classic Disney IPs, Dumbo is very racist. The elephant movie is so racist, that on Disney plus they were forced to put a disclaimer about the racist stereotypes. This shows that Disney is well aware of how problematic this franchise is, yet they still keep it around. If Disney wants to keep this light hearted flying elephant ride, they need to find a way to offset their racist footprint. Donating part of the parks proceeds to BLM or other black organizations is a start. Discounting POC tickets would also be a great way to offset their racist footprint. 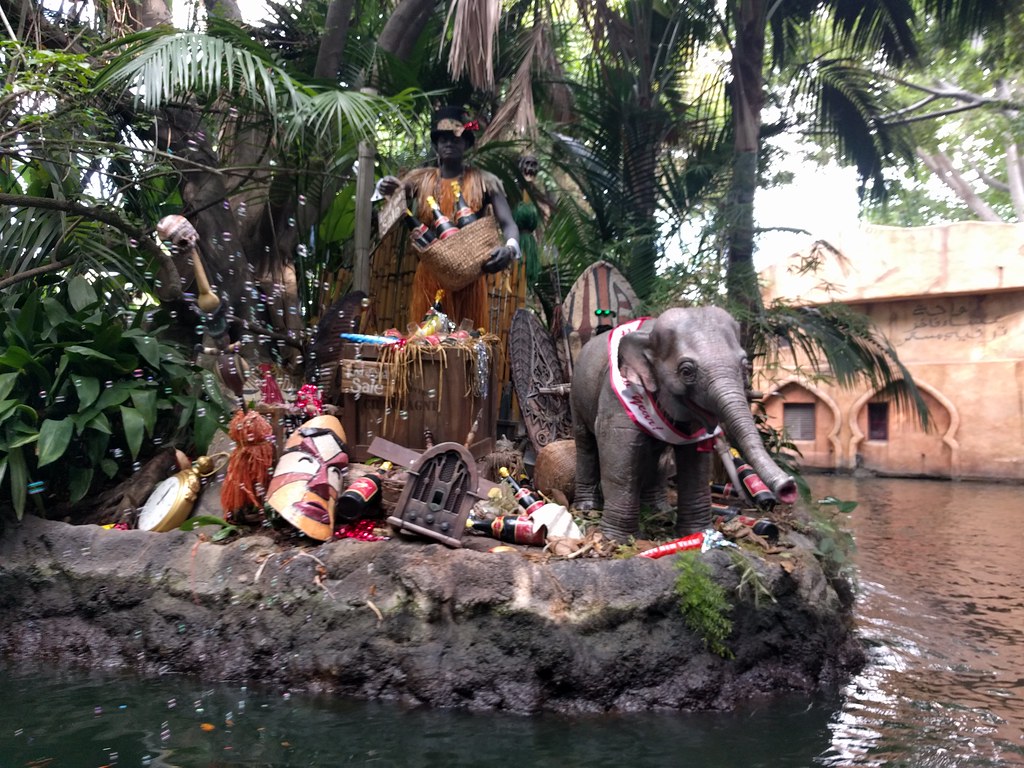 This ride has been on the chopping block for some time now. It’s representation of African Americans as savage, is not acceptable. Many native peoples have protested the ride and called for it’s removal. With the new movie coming in 2021, there will be a spotlight on this problematic ride. If you want it shut down, you can sign this petition. 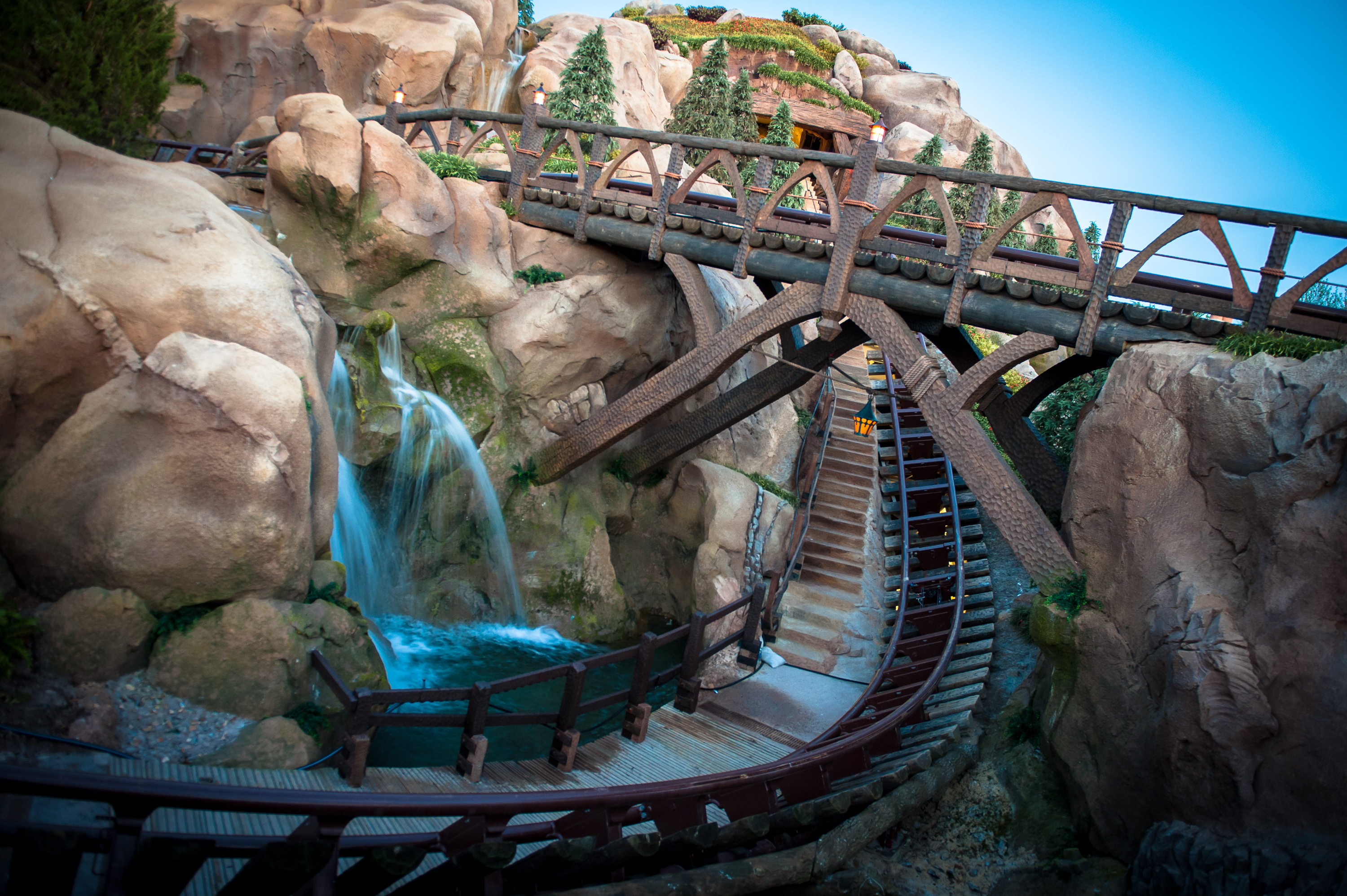 The story of Snow White is based on a German fairytale. We are all familiar with the Snow White story. However, people rarely think about how problematic the role of the prince is. It is a story that glorifies sexual assault, and in 2020, that is not ok. Subsequently, the ride based on the snow white story is guilty by association. Especially when you consider the demeaning depiction of the little people, this ride needs a reboot. 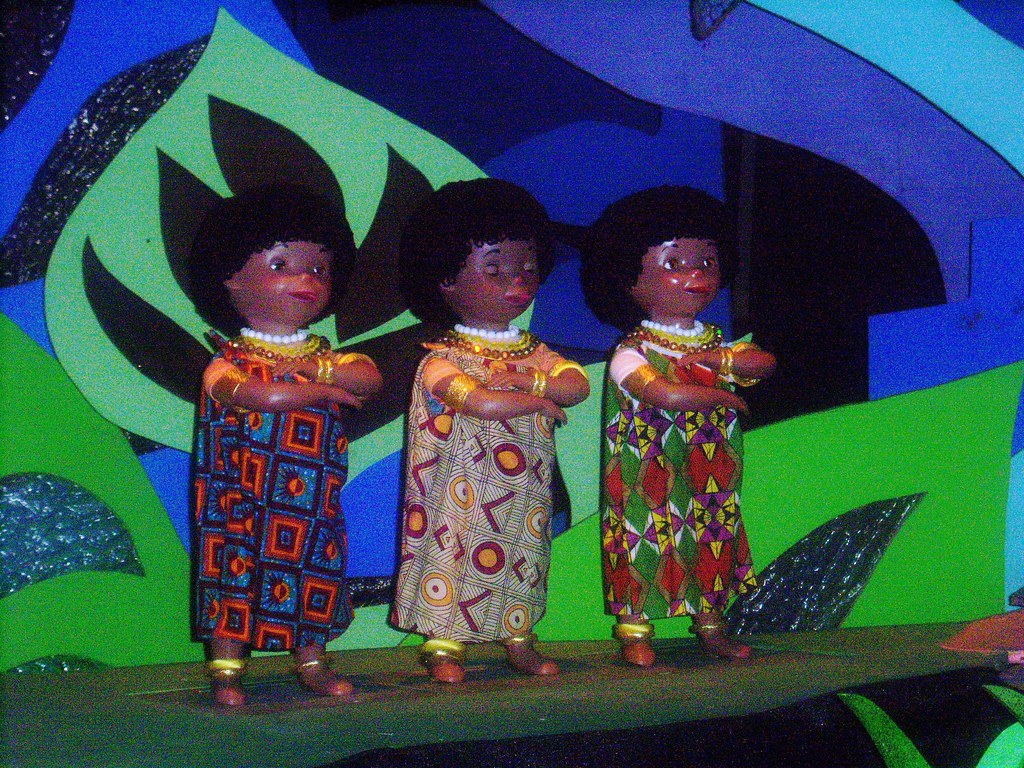 These wooden figures are literally white washed. Most of the children are white. Despite being a ride built to show the glories of multiculturalism, this ride does a piss poor job of displaying other races respectfully. The few people of color represented are shown with exaggerated features, and distorted faces. Did I mention that everyone on the ride is also speaking english. This has the chance to be Disney’s most inclusive ride, but it is in need of a major revamp. While they are fixing the white washing, they should also try to make the animatronics less creepy. 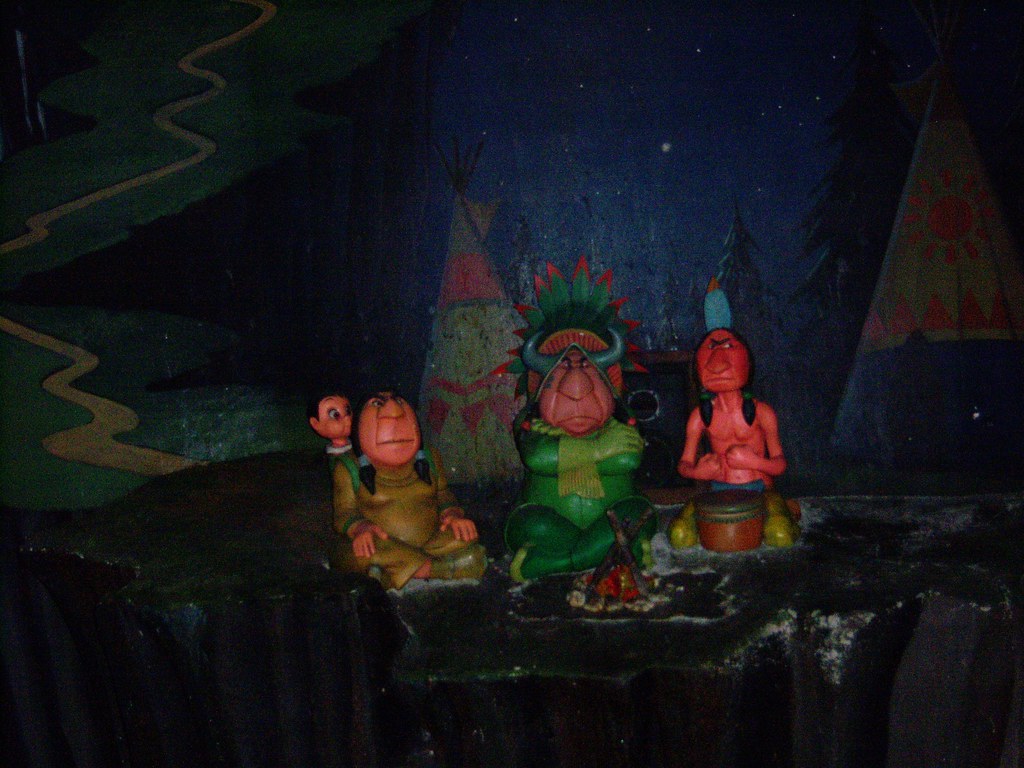 This ride contains some of the most disgusting depictions of native Americans, save for the wooden statues outside of conveniences stores. Peter Pan racist, this ride is racist, and until they update one or both of them, Disney should be boycotted.

Pirates of the Caribbean 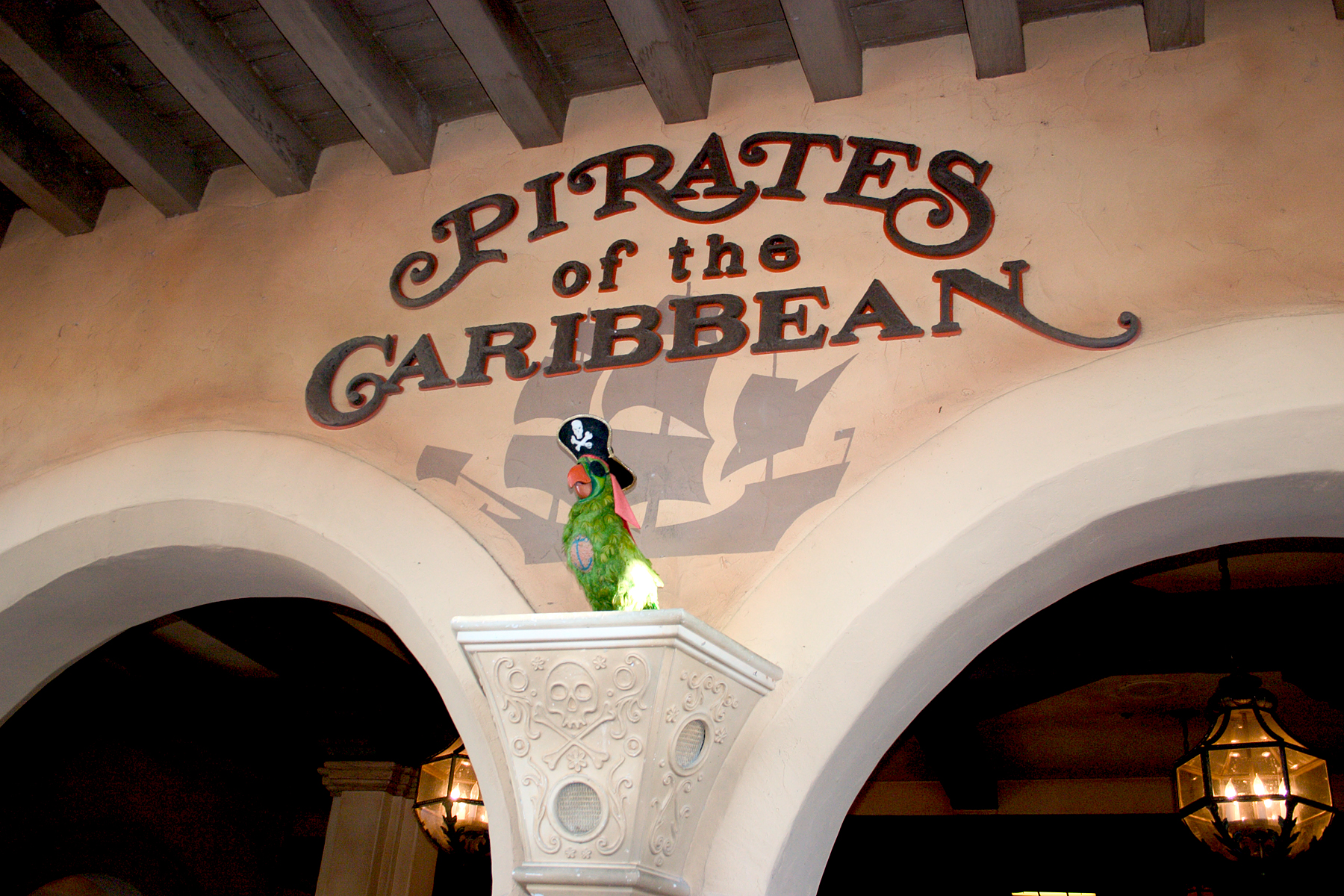 It shows a POCs looting (which they don’t). At the moment it also has a severe lack of female pirates. Hopefully, Disney will be able to update it to include better female representation, much like they did with the films. Honestly, if there is a Margot Robbie cameo in the updated ride, everything will be ok. 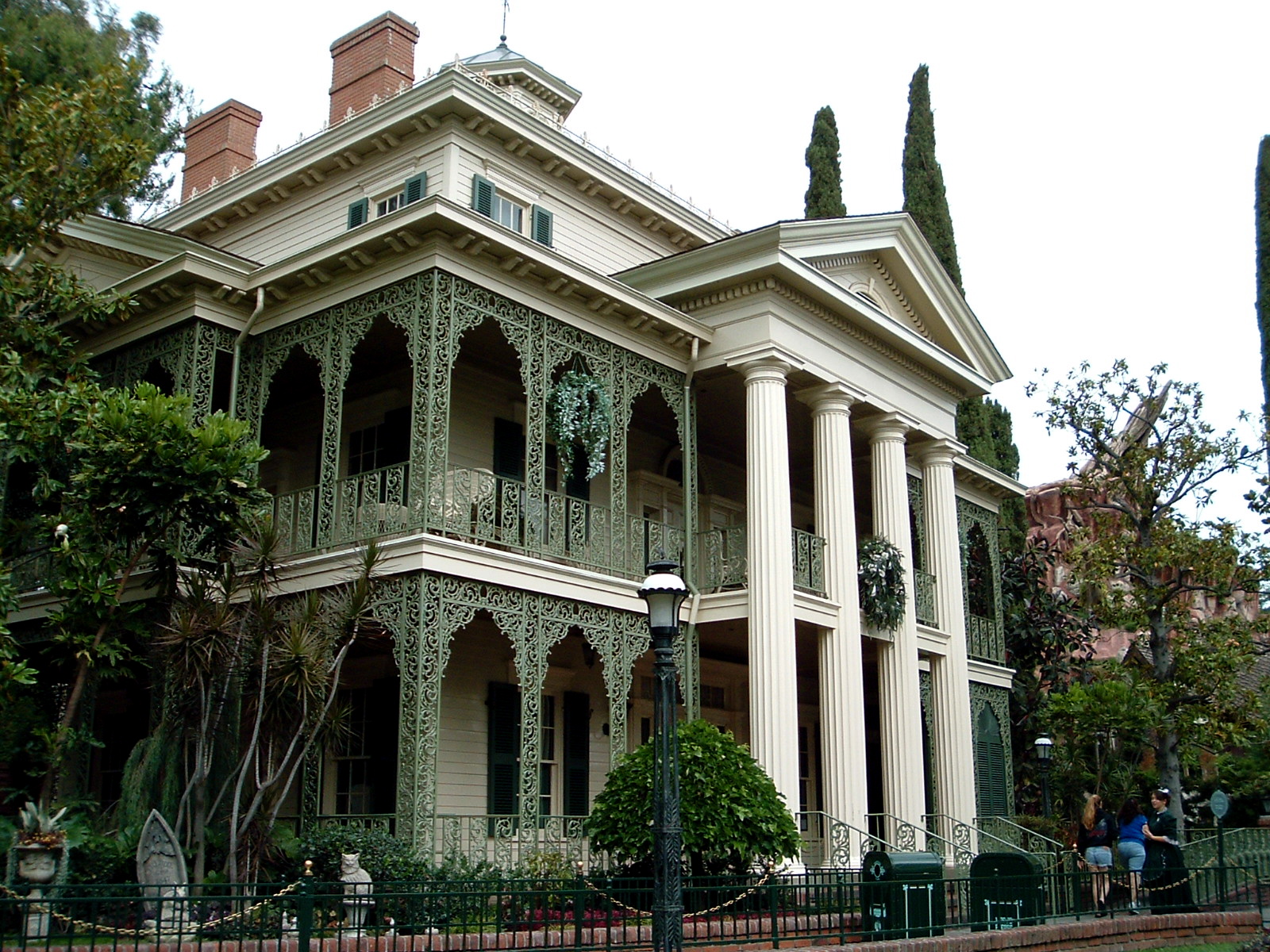 Despite the movie The Haunted Mansion having a black lead, the ride has still not caught up on the diversity quota. There are no black ghosts, and that is a serious problem. Eddie Murphy should be appalled that this movie ride is so white washed.

This article would not be possible without the contributions of my good friend William. Please check out his Twitter, Click Here.